The Pareto Principle in Freelancing 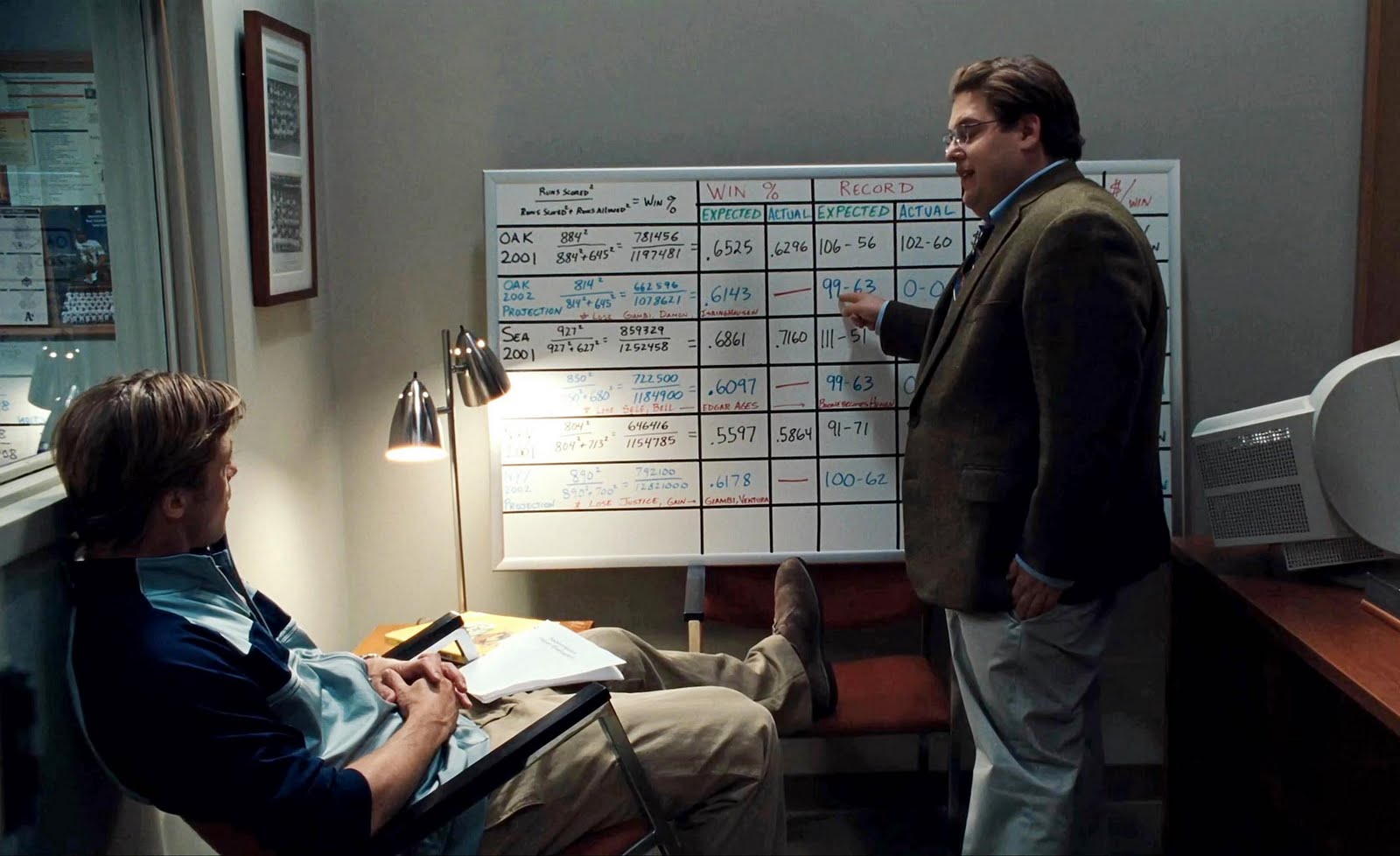 Paul DePodesta wasn’t the typical baseball guy. A Harvard grad with a degree in economics, he was obsessed with baseball statistics, sure. But he never played the game seriously.

Fortunately for the Oakland A’s, who hired him, he was good at those statistics. Really, really good. Once, he even plugged in every single statistic from every single baseball team of the twentieth century into an equation of his design. His goal, according to Michael Lewis’ Moneyball:

[Testing] which of [the variables] correlated most closely with winning percentage. [DePodesta] found only two, both offensive statistics, inextricably linked to baseball success: on-base percentage and slugging percentage. Everything else was far less important.

In short, DePodesta was trying to isolate the success of baseball teams down to one number he could focus on.

The movie Moneyball also explains. Skip to a minute and thirty seconds in.

After all that work, DePodesta eventually found two statistics that had direct correlations with wins: on-base percentage and slugging.

But a new statistic was gaining steam: OPS (on-base plus slugging). It involved a highly sophisticated equation of…

…adding the two together.

The idea, which DePodesta and general manager Billy Beane championed in the turn-of-the-century Oakland As, was simple: if they got a player’s success down to one simple statistic, they could identify glitches in the matrix.

In this case, “glitches in the matrix” meant underpaid players with high OPS. These were the high-producing outcasts that didn’t show up on the radar of the fatcat New York Yankees or Boston Red Sox.

The Oakland As had about one-third the payroll of the Yankees. But they figured they could remain competitive as long as they focused on buying wins as cheaply as possible. And buying wins, they’d figured out, meant buying OPS.

Other teams cared about star power. Charisma. The way a player looked in a uniform. The player’s age. Or, as the movie shows, the appearance of the player’s girlfriend.

They found washed-up players with bad elbows and taught them to play first base. They found bargains in players like David Justice, whose main crime was aging. They didn’t care if they had a relieving pitcher who threw funny, as long as he didn’t allow runs. They didn’t care that Johnny Damon stole a lot of bases—stolen bases barely contributed to wins—so they let the Red Sox sign him for too much money. And when they lost superstar Jason Giambi, the undeniable OPS king, to the Yankees, they took his OPS and decided that they could replace him in an abstraction. They couldn’t replace Giambi, true.

But they were losing two other players from their batting order.

What they could do was average Giambi’s OPS with those two other players, and attempt to recreate Giambi’s impact with three players of a similar average. It was a revolutionary bit of thinking, and it worked.

They won a hundred games. Set a new win streak record. Competed with teams with three times the payroll.

What can I say? Long live the nerds.

The Usefulness of the Pareto Principle

Vilfredo Pareto, the 19th-century Italian civil engineer and economist, was fascinated by wealth. Or, more accurately, with the unequal distribution of it. How did it come to be, he wondered, that the poor owned so little and the rich owned so much?

In Cours d’économie politique, he put this concept to a number. As it turned out, roughly 20% of the Italian population controlled 80% of the land.

This minority-majority issue turned out to be everywhere.

The Pareto observation essentially says most of the good stuff comes from a minority of the total stuff.

“Most of the good stuff comes from a minority of the total stuff.”

Thinking like this is how a Harvard economist like Paul DePodesta was able to find the “Pareto principle” present in baseball statistics.

The teams like the Yankees and Red Sox might pay for all sorts of things: star power, stolen bases, fans in the seats, the quality of defense, and on and on and on.

But because the Oakland As had to compete with less, they were forced into ruthless productivity. By identifying the Pareto principle in baseball, they were able to produce similar results with 1/3rd the payroll.

You’ve heard that the standard weight loss advice is: “calories in, calories out.”

The logic sounds simple enough. If you eat less than you take in, your body is destined to shed weight.

But dig down into the matrix world—the world that Pareto and DePodesta see—and you’ll see hidden complications. Adaptive thermogenesis lowers your calories out without you knowing it. Satiety issues make you hungry and “cheat meals” inevitable. You can sit down and eat 1,000 calories of chips in a sitting, but eating a full watermelon has you groaning with fullness.

Dr. Ted Naiman, author of the “PE Diet,” thinks your best bet to cut through all this complication is to focus on one key variable:

Eat the most satiating foods, he argues, and you will naturally lose and/or maintain the weight of your dreams. Up go the fish, edamame, egg whites, leafy greens, and chicken—down come the Cheetos and Pringles.

(Ever wonder what one pop and you can’t stop referred to, anyway?)

Finding another “glitch” (which isn’t really a glitch) gives Naiman a leg up on most people. He is in better shape at 50 than he was at 35. He has figured out how to eat as much deliciousness on Thanksgiving as he wants without putting on weight. The claims sound outlandish, but it heck, science has figured out how to send videos through invisible air and make the Burj Khalifa not fall down, maybe we need to raise our expectations for what’s possible. As long as you stick to one principle:

Find the most important variable, and focus on that.

As Curly told Billy Crystal in City Slickers: find your one thing, and all the rest falls into place.

How to Find the Most Important Variable and Focus on That

When you dial down what’s most important and maximize it, you do things that look miraculous to the uninitiated. But it’s simply the Pareto Principle in action.

In a recent newsletter, Elise and Mike of Peak Freelance talked about how freelancers might want to make an additional $20k per year, sure, but without getting a handle on your Pareto numbers, you won’t be able to do it with the limited time you have.

You need leverage. Here are the steps for doing it:

The most important variable in your life can vary. Maybe you want to maximize dollar-per-hour. In that case, it makes sense to seek out low-time, well-paying jobs that might not be as lucrative or as social media-friendly as the prestige jobs, but will net you a higher income by the end of the year. Or maybe you value those prestige jobs enough that you’re willing to focus on them because of the opportunities they bring.

Unfortunately, freelancing isn’t quite baseball. You’ll have to sit down and decide what your personal “OPS” is, the single statistic that yields you the most wins.

But when you do, you’ll have your blueprint right in front of you.

It will affect everything you do as a freelancer. This number can help you:

The work of getting something down to one number isn’t very pretty. It may take you a while to get a sample size large enough—a process that could take months.

As the old business saying goes: “what gets measured gets managed.”

The simple act of logging your time-per-client and hourly rate is a start. But it’s not the finish line. Feel free to add your own twists, tastes, and variables to the equation until you find out what types of clients and assignments give you the best results.

Now you’ve done the Pareto work. The next step from there?

Eliminate what’s not working, and double down on what is.

Enjoy these words? Invest in your content-quality-per-dollar by hiring me to handle your content needs for you.