EMERGENCY: Break in Case of Procrastination 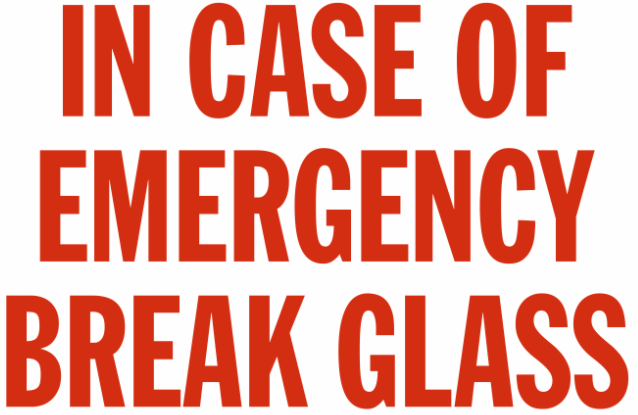 If you’re reading this, you are suffering from an emergency bout of procrastination.

You are currently suffering from low dopamine, or low dopamine sensitivity, regarding your chosen task.

Do not panic. This is treatable.

Work your way from Step 1 to Step 5 below.

Side effects may include: doing more work than you thought you would; building momentum; growing more attracted to the idea of finishing your work; bookmarking this page.

Adjust to whatever volumes make you feel relaxed.

Chances are, you’ll feel like doing more work after this.

Congratulations! You are now over your procrastination attack.

If you just did three hours of work straight without having planned to, you probably want to know what just happened.

Initially there seemed to be a benefit to procrastination, as these students had lower levels of stress compared to others, presumably as a result of putting off their work to pursue more pleasurable activities. In the end, however, the costs of procrastination far outweighed the temporary benefits. Procrastinators earned lower grades than other students and reported higher cumulative amounts of stress and illness. True procrastinators didn’t just finish their work later — the quality of it suffered, as did their own well-being.

Some people like to tell themselves that they can put things off. That they can “cram” and turn out equal work. Maybe even better work. In fact, some people say they thrive under pressure. That their best work comes when there’s the most on the line.

Who are you? Michael Jordan?

The data says differently: the more you put it off, the more the quality of your work necessarily suffers.

Are you really willing to trust your own self-assessment and anecdotes? Or is it better to try a new method and see if that works out even better?

If you’re a chronic “I’ll write the paper the night before it’s due” type of person, you don’t have to change your identity overnight. But just try an experiment. Next time you have a big project due at school or work, tell yourself you’re going to complete 50% of it by two days before it’s due.

Then, do your usual finish-it-at-the-deadline approach.

Chances are, getting the first 50% done will vastly improve the quality of your work, improve your stress levels, and save you tons of energy from having already done the hard work of getting started.

“Just do it” Doesn’t Work

Sorry, Nike. If you perceive procrastination as a problem of willpower, you’re sorely mistaken.

Unfortunately, a lot of people believe in willpower as a miracle substance that can solve any sort of issue like this. If you can just summon enough willpower, procrastination will be beaten once and for all.

And when you fail to do so—for the reason that willpower is a finite emotional resource—you will blame yourself.

Says DePaul professor Joseph Ferrari: “As I tell people, to tell the chronic procrastinator to just do it would be like saying to a clinically depressed person, cheer up.”

“Just do it” doesn’t work. You need a plan. Even if it’s as simple as the one you’re reading here.

One of the reasons you procrastinate is that you project yourself into a feeling of pain when you imagine doing the work. “Five hours to study? Argh! That sounds terrible!”

I had you start off with opening a few tabs of pleasant things: rain and Mozart. Why? For one, it’s pleasant. Two, it relaxes you, which helps defeat the anxious state of worrying about how hard the work will be.

But most importantly, what you didn’t know is this: you were beginning the process without knowing it.

This is important because the beginning is half the battle. This is the point that requires the most energy and the most willpower. You don’t need as much energy to write the 501st word as you do the 1st.

When you sit down to work, you have to do the difficult work of changing your emotional momentum. Create a “soft runway” for yourself to launch into the work.

Make it as easy and pleasant as possible. I’d offer you a cupcake or something, but Mozart and rain is the best I can do

Are you ready for some highly unqualified armchair pseudopsychology? My hypothesis is that procrastination is often a problem related to dopamine.

Think of dopamine as a seeking-reward hormone. It’s the excitement of anticipation. Says the science:

Dopamine (DA) plays a vital role in reward and movement regulation in the brain. In the reward pathway, the production of DA takes place in the ventral tegmental area (VTA), in nerve cell bodies.

In other words, it’s going to have an enormous amount of input on your sensations of reward-seeking.

Think about dopamine in a simpler sense. Ever hear the catch-phrase, “once you pop, you can’t stop”?

It’s true. Maybe that’s the reason the Our Father says “lead us not into temptation” rather than “help us get out of temptation once we’re already there.”

If you’re trying to quit smoking, you don’t want a box of cigarettes in your car. You don’t want any part of temptation in the first place. When your reward-seeking motivational systems kick in, it will be biologically more difficult for you to stop the behavior.

If you’re procrastinating, the same thing is happening It isn’t too hard to avoid procrastination if you were sitting in a jail cell with nothing to do but read that book you’ve been meaning to get around to.

But you’re not in a jail cell. There are rewards all around you. You can leave this website right now and go play a highly entertaining computer game. You can get some quick dopamine pops from social media. Maybe you can even do something more wholesome and healthy, like take a hike on an awesome summit in the Rockies. (Hey. I don’t know where you live.)

And if you’re thinking about doing other pleasurable things, that’s where the neurotransmitters are going to point you. “Reward there! Reward there! Go there!”

A recent study seems to suggest this is the case. In fact, we’re far more likely to procrastinate something when we associate it with feelings of dread rather than reward.

Which would you choose? Eating bon-bons or working on something likely to frustrate you?

The key is in changing this emotional interpretation of each event.

Seeing your task as negative means you’re only 50/50 about doing it, but reframing it as a positive pops you up to almost 100 percent likelihood of getting it started and completed.

If you’re procrastinating, you can’t really resolve this without overcoming that. But since we know that willpower is finite and unreliable, this is a challenge.

In one study, researchers had subjects work on a puzzle that was impossible to finish. The researchers wanted to test which group would last the longest before giving into temptation.

Who worked on the puzzle longer?

The radish group, of course.

When you’re procrastinating, there’s a very good chance that you’re struggling with cookies more than radishes. If the only other alternative is radishes, you can probably sit down and complete the task you want.

Now, this is an “emergency” post. So if you have a bunch of potential rewards that are making it difficult to sit down and work, you probably can’t get of them all right away. That would require, say, clearing out your apartment/office/house. And since you’re feeling procrastinate-y today, that’s not an option.

The only other way to make procrastination less appealing is to break that dopamine cycle in the gentlest way possible. That’s why we break it down into micro-steps that are somewhat pleasant.

One final word here: dopamine isn’t a bad thing. It’s there for a reason. It’s the motivator, the reward-seeker, the reward-giver. You can run through walls if your dopamine wants you to.

The problem is that when you procrastinate, your dopamine is likely telling you to go towards some other reward. It then takes you additional energy to sit down and work. You’re not only fighting the dopamine urge to seek the other reward, but you’re trying to get yourself to do something else. It’s a double-whammy apocalypse of will-power destroying momentum that will absolutely destroy your ability to sit down and do work.

We change this by creating a new “reward-seeking behavior” cycle. By having a box to check off, you now have an objective, like in a video game. “Two points”? Video game.

The idea is to use the same tactics that game designers and app engineers use to hook you to their games. You’re doing the same thing here; you’re just doing it a smaller, more manageable level. A one-time use of the idea, just to get yourself back into the emotional momentum of work.

And what do I mean by “emotional momentum”? When you feel a rush of dopamine pushing you in one direction, that’s emotional momentum. It’s an urgency to complete a task that you can’t explain, but you certainly feel.

If you’re finding it hard to sit down and work, chances are that cycle’s working against you. Use the methods here, tweak it for yourself, and see if you can’t get it working for you.

And by the way, why are you still reading this?

Get back to work.

Sick of putting off writing that awesome content your business or blog sorely needs? Here’s a faster remedy: hire me to do it for you.